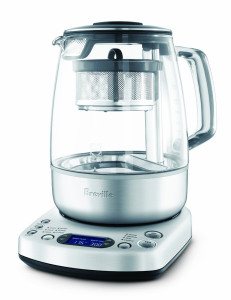 For months I walked past the Breville One-Touch Tea Maker at my local tea shop, suspecting it of being overpriced and full of useless features and impossible-to-assemble whirligigs. So instead of buying it for myself, I bought one for Eric Shaw Quinn and waited for the complaints to roll in. (Am I a good friend, or what? Eric says, ‘What’!) Instead, he began to sing it’s praises. And we later learned, he wasn’t using some of it’s best perks, like the one that allows you to have a perfectly brewed cup of your favorite tea waiting for you when you first wake up. Make no mistake. This machine is best for fans of loose tea, and yes, it’s a bit more labor intensive than popping your favorite tea bag into a cup of boiling water. But for highly caffeinated teas, you can get a stronger brew, and the time and temperature buttons allow you to follow the customized brew settings most tea makers are now including with their products. No more cups of sour, over-brewed tea because you left the strainer sitting in the tea pot longer than you should have. Breville also sells a powdered cleaning solution which literally makes the entire device sparkle after a simple brewing process. (Several bags were included in the device we ordered for our studio a few months backs.)