Christopher’s Favorites ☞ Dawn of the Planet of the Apes 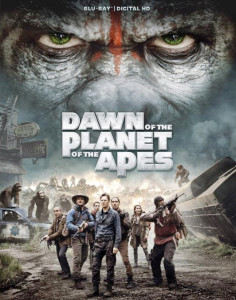 I was so knocked out by RISE OF THE PLANET OF THE APES, the arresting franchise reboot starring James Franco, I couldn’t wait for the sequel. While Matt Reeves has never directed anything that isn’t visually stunning, the trailers for this film suggested a tired tale of reactionary, apocalypse-surviving humans brutalizing gentle apes. Familiar. Predictable. Stale. Don’t believe the spare, suggestive trailers. This movie is anything but stale. It’s been ten years since the pandemic first unleashed in the final minutes of the previous film has wiped most of humanity off the map. A band of genetically enhanced apes immune to the virus have built their own peaceful community deep in Muir Woods, but their leader, Caesar, grieves for his former human companions in a manner that gives this film an unexpected emotional depth from it’s opening moments. When a band of human survivors penetrate the woods in search of a water source to power their shelter inside the ruins of San Francisco, the first skirmish between man and ape sets off a series of clashes, misunderstandings, compromises and revelations that give this action film it’s unexpectedly complex and moving script. It’s also worth noting the film has the latest in motion capture technology to thank for much of its success. Visually subtle but dazzlingly effective, it gives every simian performance a breathtaking authenticity. As Eric said when we walked out of the theatre, they need to invent a special Oscar category for Best Motion Capture Performance, and they need to give it to Andy Serkis retroactively for this film. His work here is brilliant. No epic action thriller is complete without a dazzling final sequence. Taken together, the scene in which the apes invade San Francisco coupled with the faceoff between Caesar and his nemesis inside a skyscraper’s ruins make for a breathtaking finish which rivals the Golden Gate Bridge sequence that rounded out the previous film. Simply put, DAWN OF THE PLANET OF THE APES is one of the greatest sci-fi action films ever made.