Christopher’s Favorites ☞ The Storm and The Darkness 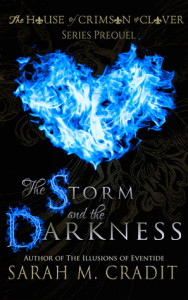 I loved this book. I repeat. I loved this book! Yes, it’s part of a larger series about two sprawling, intertwined families. But don’t let that deter you. It works as a riveting standalone. I downloaded it during my book tour last year and immediately found myself devouring it in airport waiting areas or on bumpy commuter flights or pretty much anyplace I was standing still for a longer than a few minutes at a time. Too often authors force a trade off between edgy, complex characterizations and strong plotting, but in THE STORM AND THE DARKNESS, Sarah Cradit gives us both in equal measure. Ana Deschanel has fled New Orleans, the only home she’s ever known, claiming a rugged, isolated island off the coast of Maine as an uneasy place of refuge. The men she’s left her in wake are baffled as to her sudden departure and desperate for her to return. The men she’s just met on Summer Island are either suspiciously cold or obtrusively warm in ways suggesting they might already know more about her haunted past than she’d like to share. With impeccable pacing, Cradit shifts effortlessly between these various points of view, demonstrating superb psychological insight and a compassion for even her most damaged (and frightening) characters. Her talent for creating atmosphere rivals Daphne du Maurier. This is modern Gothic with fierce smarts. Can’t say it enough. I loved this book. I’m taking my sweet time reading the rest of the series because I know I won’t want it to end.