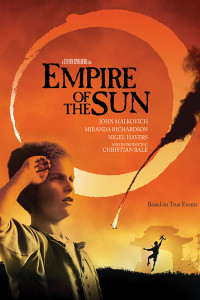 I’m a huge Stephen Spielberg fan and I believe EMPIRE OF THE SUN is one of his greatest films. It resonated deeply with me when I was young, probably because it’s told largely from the point of view of a young boy. But it’s also an epic journey, filled with unforgettable characters and haunting, tear-jerking visuals, all of it accompanied by one of the best John Williams soundtracks to date. A (very) young Christian Bale stars as child of immense privilege struggling to survive the horrors of war after he’s separated from his wealthy parents during the bloody Japanese invasion of Shanghai in 1941. John Malkovich and Miranda Richardson also star. A film I watch at least once a year.