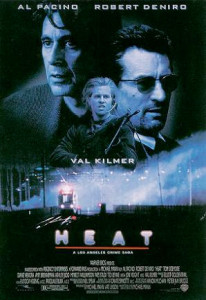 This film is a visual feast that made me want to move to Los Angeles. Not so I could become a bank robber or a cop. Instead, I wanted to immerse myself in the seas of glittering lights and warm windswept coastlines that served as the backdrop for this crime drama’s every angsty scene. Roman Polanski was quoted as saying “L.A is a beautiful city at night from a distance,” and HEAT makes the most of that assertion. The simple storyline is modern noir at it’s most sleek and it unfolds like a pared down version of a Michael Connelly novel directed by Ridley Scott. But the film’s actual director, Michael Mann, has his own signature style that turns every freeway overpass into something monumental. In college, I wrote most of my early stories to the film’s moody, electronic score, expertly crafted by Elliot Goldenthal, one of Hollywood’s greatest composers.