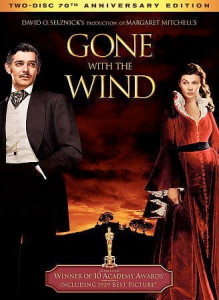 Well, what can I say? I just can’t help myself. When I was a school aged child growing up in the South during the days of desegregation, we were put on school buses about once a year and taken to a local theatre for a screening of GONE WITH THE WIND as part of our instruction in history. The first time I saw the film, we drove to Shreveport and I wore a sport coat. Huge red velvet curtains were drawn for intermission while music composed for the interval was played, a quaint custom also gone with the wind. I don’t just love GWTW like I do because I’m a southerner. I cringe at many of the depictions and the stereotypes that abound within the film. I wonder what it would be like to bring the acting style used throughout to a modern film. But if you cook the books just right or only count the number of tickets sold or something, GWTW is consistently the most successful movie of all time. I think it’s because it depicts the most awful thing that has maybe ever happened in this country in a way that we can bear to look at. Or maybe I just want to be Scarlett O’Hara and get swept of my feet by Rhett Butler. Either way, it’s always on my favorite’s list.