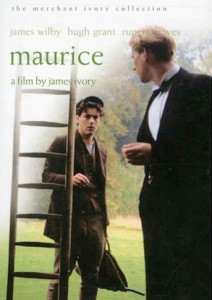 MAURICE remains the most romantic movie I have ever seen. The boat house scene takes my breath away. I won’t say more if you haven’t seen it, but if you’re looking for a big, beautiful, romantic love story that just happens to be about two men? Well, then this is your picture. It sure is mine. I’ve had a crush on Rupert Graves ever since I first saw this film. Based on the equally recommendable E.M. Forster novel, I think MAURICE is Hugh Grant’s first movie and I know it’s the best film Merchant/Ivory has ever done. And that’s saying something, given I love everything they’ve ever done. Seeing men passionate about each other at a movie theatre in 1987 was enough to make me swoon. Even now in this age of insta-porn, the effect, on me at least, is still the same as it was then and that’s what makes MAURICE one of my very favorite films.