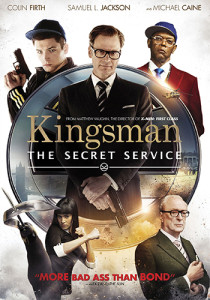 Yes, its star Taron Egerton is really, really hot. And yes, he was the main reason I wanted to see Kingsman in the first place.  And yes, Samuel Jackson’s performance as the tech mogul villain is a little strange and off-the-mark. But this is still a slick, smart and wildly entertaining action-packed thriller. The proceedings are also informed by a kind of tongue-in-cheek British sophistication that doesn’t become so ceaselessly wry it softens the harder angles of the countdown-to-doomsday plotline. Also, there’s a woman with who can kill people with blades hidden in her prosthetic legs. Cool, right? (It’s cool. Trust me.) Also, Taron Egerton is really hot and it’s not difficult to see why the mentor relationship between Colin Firth and Taron’s character spawned a series of animated GIF’s that have become one of the more popular homoerotic trends on social media. And by social media, I mean Tumblr.