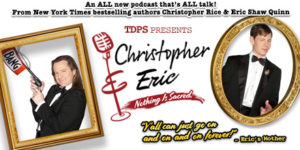 A box office bomb at the theater, THE FROZEN GROUND rocketed to Netflix’s Top 10 when it landed on the streamer in 2020. Starring Nicolas Cage, John Cusak and former Disney star Vanessa Hudgens, this cinematic depiction of notorious Alaskan serial killer Robert Hansen, who hunted women for sport, was based on the true crimes covered in Episode 61, the most recent installment of Christopher & Eric’s True Crime TV Club. Armed with the facts, Christopher and Eric compare truth to cinematic license. Would the film have made a greater impact if it had been released during the #MeToo era? Their incisive observations address this question and others as they return to the brutal Alaskan wilderness and its dark secrets.

(This episode was recorded remotely during the COVID-19 pandemic, which might explain slight variations in sound quality.)

New York Times bestselling novelists Christopher Rice (The Burning Girl Series) and Eric Shaw Quinn (The Write Murder Mysteries) return to their studio on West Hollywood’s Sunset Strip for an all new podcast that’s all talk. Join them for their trademark blend of humor, irreverence and passionate opinion as they dish on some of the most popular true crime TV shows of the moment in their recurring, special feature “Christopher & Eric’s True Crime TV Club”. (A production of TDPS, the same network that brought you the comedy/variety and celebrity interview filled fun of The Dinner Party Show.)