A View To a Thrill 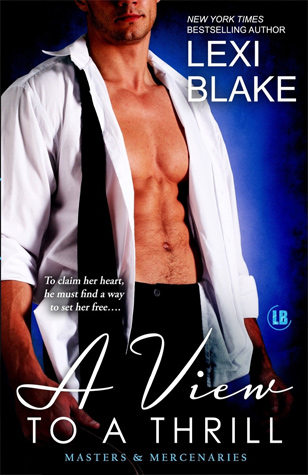 A Spy without a Country

Simon Weston grew up royal in a place where aristocracy still mattered. Serving Queen and country meant everything to him, until MI6 marked him as damaged goods and he left his home in disgrace. Ian Taggart showed him a better way to serve his fellow man and introduced him to Sanctum, a place to pursue his passion for Dominance and submission. Topping beautiful subs was a lovely distraction until he met Chelsea, and becoming her Master turned into Simon’s most important mission.

A Woman without Hope

Chelsea Dennis grew up a pawn to the Russian mob. Her father’s violent lessons taught her that monsters lurked inside every man and they should never be trusted. Hiding in the shadows, she became something that even the monsters would fear—an information broker who exposed their dirty secrets and toppled their empires. Everything changed when Simon Weston crossed her path. Valiant and faithful, he was everything she needed—and a risk she couldn’t afford to take.

A Force too Strong to Resist

When dark forces from her past threaten her newfound family at Sanctum, Chelsea must turn to Simon, the one man she can trust with her darkest secrets. Their only chance to survive lies in a mystery even Chelsea has been unable to solve. As they race to uncover the truth and stay one step ahead of the assassins on their heels, they will discover a love too powerful to deny. But to stop a killer, Simon just might have to sacrifice himself…

A Masters and Mercenaries Novel by Lexi Blake