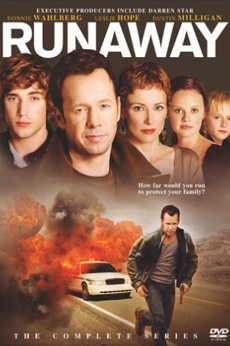 From executive producers including Darren Star (Sex and the City, TV’s Beverly Hills, 90210) comes Runaway, a thrilling series about an ordinary American family facing extraordinary danger. Wrongfully accused of murder, successful attorney Paul Rader (Donnie Wahlberg, The Sixth Sense, TV’s Band of Brothers) has taken his wife and children (including Dustin Milligan, TV’s 90210) on the run. Living as fugitives and constantly changing identities, they have learned to become anyone – and trust no one. The Raders have started over yet again, this time in a small Iowa town. As they try to avoid the authorities, uncover a deadly conspiracy, and deal with suspicious neighbors, trusting each other will be their only hope … and their greatest risk. They’re about to realize that nothing is more twisted than trying to keep your story straight.