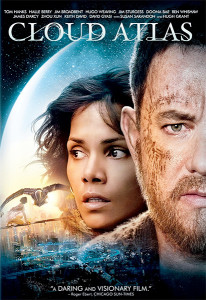 Adapted from the bestselling novel by David Mitchell, CLOUD ATLAS (2012) is a hugely ambitious and polarizing film from Andy & Lana Wachowski, the directors of THE MATRIX trilogy. It’s a cherished favorite of The Dinner Party Show guest Jack Morrissey. “I love and adore it,” he says. “I’ve seen it almost 100 times. It deals with themes of resurrection.” Jack also describes an added bonus among the film’s very full menu: “Embedded in its multiple shorelines is one of the great filmed gay love stories of all time with Ben Whishaw and James D’Arcy. It’s incredible.” CLOUD ATLAS is also a favorite of Christopher Rice and Eric Shaw Quinn.