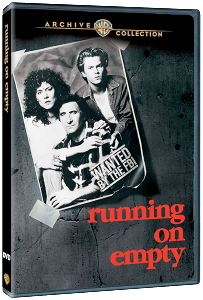 RUNNING ON EMPTY, an unsung 1988 gem, stars Christine Lahti, Judd Hirsch and Martha Plimpton and was directed by the great Sidney Lumet with an Oscar-nominated screenplay by Naomi Foner (mother of actors Jake and Maggie Gyllenhaal). “This is a movie about a husband and wife who were radicals in the 1960s and had to go on the run with their two young sons and they’ve been running ever since,” says The Dinner Party Show guest Jack Morrissey, who praises the work of River Phoenix in the film. “Phoenix was nominated for one of the great all-time performances by any actor, period,” Jack says. “It’s an unbelievably moving story about an adolescent boy finding his own identity. A great, great, great movie.”

Buy from Amazon
buy from iTunes