Christopher’s Favorites ☞ Who Knows the Storm (The Vigilante Book 1) 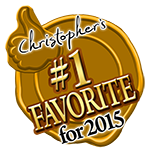 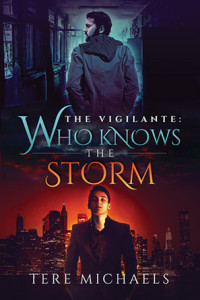 I’m still as excited about this book as I was when I first read it at the beginning of the year. And I read a lot. So the previous statement can be translated as: I haven’t read another book in 2015 that I’ve loved as much as I loved WHO KNOWS THE STORM. The sequel released a few months ago and I’ve been dying to cancel everything just so I can hole up in a comfortable corner and lose myself in Tere’s compellingly dark and swooningly romantic dystopian universe, where both of the romantic leads are gorgeous and haunted guys. And they’re being romantic with each other. My hands down favorite Favorite for 2015, without question!

Original recommendation: I inhaled this book in several hungry sittings and immediately started sending author Tere Michaels gleeful, stalker-esque e-mails about it. This is the great dark gay superhero love story I’ve always hungered for. “Gay Batman” were the words Tere used to describe her latest novel as we enjoyed drinks together at a writer’s conference a few months ago, words that had me rushing to my Kindle to download a copy. I’d met Tere at the Romantic Times Booklovers Convention in New Orleans in 2014 where I already aware of her reputation as a solid master of craft whose gay romance novels delivered a fair amount of angst along with their happily-ever-afters. But I’ve met plenty of writers with great personalities and even greater reputations only to lose interest in their books after a chapter or two. Not so with “Who Knows The Storm (The Vigilante Book 1).” The novel’s secondary characters are just as compelling and well-explored as the two gorgeous and haunted heroes. The dystopian Manhattan that serves as the book’s setting isn’t overwhelmingly bleak or chaotic. If you’ve ever fantasized about Batman and Robin falling in love (and getting it on), this novel will scratch that itch for sure, and it’ll scratch it with a smart character-driven romantic thriller that has a feel all its own. I’m breathless with anticipation over its forthcoming sequel.