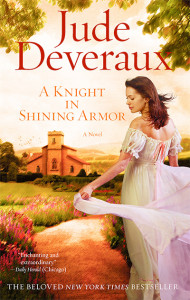 Laura says, “This was one of the first romance novels I ever read.”

Abandoned by her lover, thoroughly modern Dougless Montgomery finds herself alone and brokenhearted in an old English church. She never dreamed that a love more powerful than time awaited her there…until Nicholas Stafford, Earl of Thornwyck, a sixteenth-century knight, appeared. Drawn to him by a bond so sudden and compelling that it defied reason, Dougless knew that Nicholas was nothing less than a miracle: a man who would not seek to change her, who found her perfect just as she was.