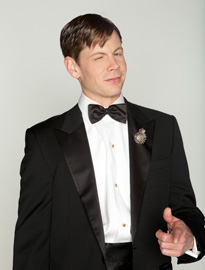 By the age of 30, Christopher Rice had published four New York Times bestselling thrillers, received a Lambda Literary Award and been declared one of People Magazine’s Sexiest Men Alive. His first work of supernatural suspense, THE HEAVENS RISE, was a finalist for the Bram Stoker Award. His debut, A DENSITY OF SOULS, was published when the author was just 22 years old. A controversial and overnight bestseller, it was greeted with a landslide of media attention, much of it devoted to the fact that Christopher is the son of legendary vampire chronicler, Anne Rice. Bestselling thriller writer (and Jack Reacher creator) Lee Child hailed Christopher’s novel LIGHT BEFORE DAY as a “book of the year”. Together with his best friend, New York Times bestselling novelist Eric Shaw Quinn, Christopher launched his own Internet radio show. THE DINNER PARTY SHOW WITH CHRISTOPHER RICE & ERIC SHAW QUINN, which has since evolved into The Dinner Party Show You Tube channel, which premieres a new video “serving” every Sunday at 8 PM ET/ 5 PM PT.