Shea here, once again, to give you fair warning that The Dinner Party Show, hosted by the two (allegedly) distinguished writers I am tasked with serving on a daily basis, is set to premiere this Sunday evening, live, at 8 PM Eastern, 5 PM Pacific. Still. So if you do plan to attend, mark your date books accordingly. And if you do not, perhaps it’s time to begin preparing a suitable excuse.

To be honest, I haven’t seen much of Mssrs. Rice or Quinn over the past few days. They’ve been quite busy preparing for this little debut of theirs. True, every now and then, there’s a loud, bone-chilling crash inside the studio, followed by a series of high pitched yelps which suggest that Mr. Quinn has caught his formidable locks on something that carries an electrical charge. But aside from that, everything has been quite peaceful.

Of course, there was the frantic little note they slid under my door early this morning, asking that I tell you a bit about some special guests set to join them this Sunday. You already know about the most famous of them. (Honestly! I do lose sleep nights wondering what magical feat Christopher worked to secure best-selling novelist Anne Rice for the show’s premiere. Then the chamomile tea kicks in after a minute or two and I forget I ever posed the question.)

But I digress. As usual. Because it’s my only solace.

Guests! They’re calling them special correspondents, a label which lends them all an air of journalistic credibility I’m not sure they deserve. But they do hail from various tawdry realms of politics, entertainment and unfortunately popular culture. And they claim, quite presumptuously, I might add, to be well versed in the topics on which they spew. We’ll see about that.

There’s the supposed “relationship expert” JoNell Samms. She hails from a little hamlet buried deep in the moist folds of the American South called Poison Creek! What a charming name for a town with a huge prison just outside of it! Her approach to marriage is a practical one. Dare I say…convenient.

And then there’s precious little Jordan Ampersand. Despite his tiny stature and (dying) feline voice, Christopher has appointed him to the role of “critic-at-large.” While I’m not sure he’s been all over the town, as he claims, he certainly does get around, as they say. DUI’s be damned!

And the latest and breakingest news will be brought to you by a rather impassioned fellow named Breck Artery, who has never met a headline he can’t spin to fit his own thundering agenda.

I hope these little teases have been helpful, as either a preview or a suitable warning. I am sorry I haven’t managed to snatch a photo of any of these vivid characters during their visits to the studio. But I already broke my camera once this month. 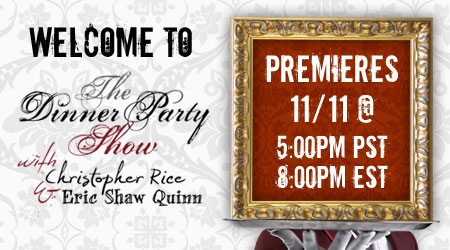