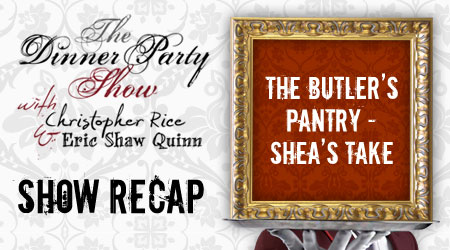 Death by llama. That’s right, listeners. The words I cannot un-sear from my poor brain after enduring the December 9th LiveCast of The Dinner Party Show are “death by llama”. When I was informed the evening’s guests would include famed prosecutor turned mystery novelist Marcia Clark and Edgar Award winning novelist and forensic science advocate Jan Burke, I prepared myself for a serious episode, rife with weighty discussions of America’s baffling criminal justice system. And instead, I got…death by llama.

You see, it seems Christopher and Eric, slaves to merriment that they are, goaded their highly accomplished guests into performing a roundup of the most outlandish deaths from around the world, and aside from a gentleman who choked to death during a cockroach eating contest, the undisputed title of Most Outlandish Death In The Universe went to the poor woman whose pet llama slipped on wet grass while rushing to greet her, thereby slamming into her with the force of, well…the force of a llama, triggering a head injury and a heart attack in the process.

Of course, there was plenty of seriousness at the top of the broadcast. Eric led an insightful discussion about the tragic suicide of a British nurse who was subjected to international ridicule after she fell victim to a prank call from two Australian disc jockeys. And when Marcia Clark first took her seat the dining table, she engaged the two hosts in a rousing discussion of whether or not cameras should be allowed in the courtrooms of major murder trials (a topic on which she is imminently qualified to speak. O.J. *cough, cough* O.J.!)

Award-winning author Jan Burke brought a welcome dollop of philanthropy to the buffet. She informed listeners about her own non-profit, the Crime Lab Project, which seeks to educate Americans about “the reality of forensic science”, including the lack of universal federal standards for death investigators, the often threadbare forensic facilities available to law enforcement agencies and the shocking number of times people may literally get away with murder due to limited police resources. And then…death by llama.

And yes, the special correspondents were back in full force, including an installment of Audiobook Bestsellers that probably made poor Stieg Larsson turn over in his grave. JoNell Samms returned with more inadvisable relationship advice, this time for those who suspect their spouses of cheating. (Is there an emoticon for an eye-roll?) Texan travel expert Tanya Lee Musgrave was back to describe how she assaulted a gang of school children during a trip to Tuscany. But by then, I was well into my sherry.

So there it is, folks, another LiveCast of The Dinner Party Show and the studio is still standing, the guests are still alive and healthy and Christopher and Eric are still delivering my paychecks in a timely fashion. Oh, well. Better luck next week.