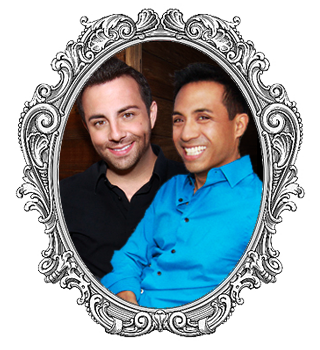 Paul David “Pauly” became a force in journalism and media as the candid and hilarious host of the popular podcast The Fruit Salad Show. His conversational and fun interview style attracts some of the biggest names in entertainment.

Pauly is excited to bring his offbeat style, sharp wit, and charm back to the airwaves after a long break which included shooting two television shows, hosting and emceeing many events, getting a dog, playing a drag queen in a web series, writing and performing a successful one man show, writing a book, “Fat Kid (and Other Large Tales)” which will hopefully see bookstore shelves in the near future, and getting engaged! He also may or may not be featured in a Richard Simmons DVD.

He was born, raised, and still resides in his favorite city in the whole world, Los Angeles. He is proud to join the L.A. Talk Radio family with his co-host and fiance, Ed Marco.

Ed Marco “Monks” is excited to launch his career in entertainment on “Hello, Pauly”. Monks obtained his undergrad at M.I.T. along with two Master’s degrees from Loyola Marymount and UC Berkeley. After exploring the field of environmental engineering, Monks decided he needed something different and decided to become an educator, a field where he would excel and flourish for the next 12 years.

Monks was raised in Orange County. He was born in Los Angeles, where he currently resides.

He is very excited to be sharing the spotlight with his very handsome, talented, and HILARIOUS fiance, Pauly, who also wrote this sentence.