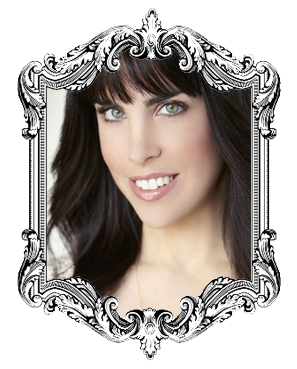 Heavily influenced by a hybrid diet of heavy metal and hot sauce in her formative years, Caprice lives her life as though each day were her last, disregarding past-due notices and the “Don’t Walk” sign when crossing busy intersections. She spends her time writing novels, TV shows and feature films. Her work is a hilarious and thought-provoking amalgam of biting observational humor, incisive pop culture commentary, an exploration of modern romantic relationships and a pinch of rosemary. Because rosemary makes everything better. Seriously. Try it.

THE FORMATIVE YEARS
Caprice was born in Hollywood, but don’t hold that against her. She doesn’t go wandering around with a tiny dog in her purse. Rather, she goes wandering around with a fairly small dog in a little red wagon. (Alright, there’s no little red wagon, but that’s an adorable image, isn’t it?) Caprice shares a birthday with everyone’s favorite mouthless feline, Hello Kitty. Her mother, renowned film, television and stage actress Tina Louise, is perhaps best known as Ginger Grant from the beloved sitcom “Gilligan’s Island.” The beloved TV icon tells anyone who comes close enough that Caprice is her life’s greatest achievement. Her father is former talk show host and Grammy winner Les Crane, who conducted legendary TV interviews with Malcolm X, Bob Dylan (the singer/songwriter’s most famous and sought after appearance), and The Mamas and The Papas (who lacked a name until Les suggested the one that would eventually stick).

AN ARTIST IS BORN
Soon after graduating, she landed a job with MTV Networks. At MTV, she wrote and produced a massive array of comedy, dramedy, news, reviews, biography, rock-star hagiography, L.A. is covered in smography, promotions, devotions and countless commotions.

When she got sick of that, she continued music supervising for film/TV, but turned her sharp wit and joie de vivre which, through the years, had earned her both accolades and jail time – to writing for the big screen. And the medium-sized bookshelf. And whatever size your TV is.

, Caprice Crane’s debut novel, was among the first fruits of that effort, dripping with originality, biting wit, pop music and movie references, and laced with more laughs than a pomegranate’s got seeds. The novel centers around a struggling record exec with dreams of hitting it big and a recently fired PR-executive-turned-waitress who embark on a cross-country journey to find the meaning of life, the next hot band, the founder of Starbucks, and maybe…love. That is if they don’t kill each other first. The book won Best Chick Lit Book of 2006 in the Mainstream Fiction category of the RT Reviewer’s Choice Awards.

Her second novel, the internationally bestselling Forget About It

, is the tale of a girl who fakes amnesia to reinvent herself and escape a life she no longer wants to lead. The book won Best Chick Lit Book of 2007 in the Mainstream Fiction category of the RT Reviewer’s Choice Awards.

, hit shelves in 2009. (Ever notice that books always hit shelves? Reading isn’t just fundamental – it’s violent.) This hilarious and touching story follows a divorcing couple and the battle that ensues over custody of the husband’s entire family.

So That’s When She Took A Break, Right? Backpacked Across Europe, Stayed In A Hostel, Wondered Why People Kept Disappearing?
Nope. Even as she was wrapping up Family Affair, Caprice headed back west to write for the new version of “90210.” She followed that up by writing for the new version of “Melrose Place,” which unfortunately failed to connect with viewers due to its regular time slot of 4:37 in the morning. (Disclaimer: That previous sentence might not be entirely factually correct.) And never one to work on one project when she can work on 142, Caprice kept her nose to the grindstone. (Which is much better than what most people in Hollywood put up their nose, trust us.) Caprice wrote the original screenplay of a movie called Keep It Together, which was rewritten and released under a different name this summer … but we won’t talk about that.

THESE DAYS…
Caprice is writing and developing several film and TV projects, and gearing up for the release of her debut young adult novel, Confessions of a Hater (August 27, 2013). Keep checking back. She’s always up to something, this one…

CONFESSIONS OF A HATER