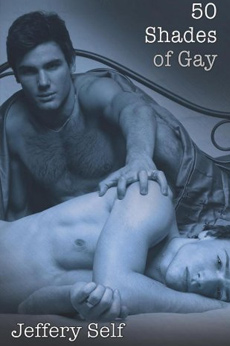 Meeting his celebrity crush was one thing, but even Hollywood could not have written what happened next.

Inspired by E.L. James’ international phenomenon, 50 Shades of Grey, Jeffery Self’s 50 Shades of Gay tells the story of a young celebrity blogger, Alex Kirby, who interviews Taylor Grayson, a superstar leading man in Hollywood blockbuster films. Grayson also happens to be a closeted gay man with a passion for BDSM. When Grayson draws the younger man into his private orbit and initiates him into his sexual world, the younger man can tell that kinky sex has shielded Grayson from having a real emotional connection with another man. But he is head over heels in love with the older, powerful, gorgeous man who has selected him for the pleasures of submission. Ultimately, Alex decides to experiment with the power differential between them, and see if he can break through the armor that Grayson and his layers of Hollywood handlers have imprisoned him in. Will he be able to open Grayson up to real intimacy, or will he cause Grayson to end the relationship and cut himself off yet again?

Jeffery Self is a writer and an actor. He co-created and starred in Jeffery and Cole Casserole on Logo, and has appeared on numerous television shows, including Desperate Housewives, 90210, Hot in Cleveland, and 30 Rock as Randy Lemon. His book Straight People: A Spotter’s Guide is forthcoming. Follow him on Twitter @JefferySelf. You can also visit him online at Jefferyself.tumblr.com.