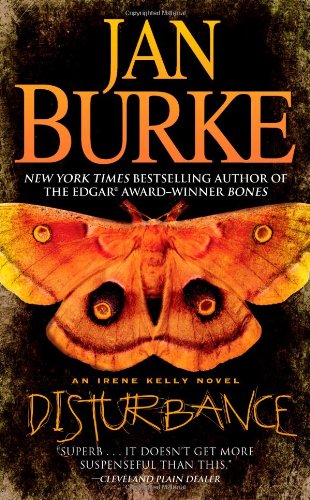 Disturbance finds Irene facing an old enemy: serial killer Nick Parrish, last seen in Bones, has recovered from his injuries, and has vowed to have revenge. Others dismiss her fears by reminding her he’s in prison, but Irene finds little reassurance in that. He’s connected to the outside world through an online group of misguided fans that calls itself The Moths.
They seem intent on disturbing her peace of mind, playing unnerving tricks. But matters take a darker turn when the frozen body of a young woman is found in the trunk of a car parked near Irene’s home. The corpse is has been painted—decorated with moths. She won’t be the only calling card Parrish’s helpers leave for Irene.

Irene has other upheaval to contend with. The newspaper where she has worked most of her adult life is shutting down. Being a reporter has been more than a job—it has been a bone-deep part of her identity. Reporting for the Express was the work she dreamed of doing from childhood, a career in which she excelled, and telling the stories of her community has brought her satisfaction and a sense of purpose.

She’s tough and resilient, but this is a blow that leaves more than a bruise. Can she reinvent herself, or even find the will to do so?
Nick Parrish may not give her time to answer that question. He’s back. And he’s not alone.

Disturbance was nominated for a Golden Nugget Award by Left Coast Crime 2012. The award is given for the best mystery novel set in California.