Girls Will Be Girls 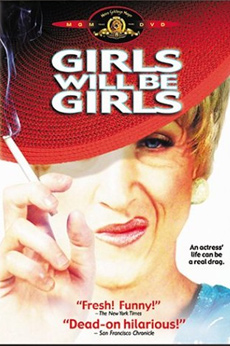 The confessional, behind-the-scenes showbiz melodrama goes under the knife — so to speak — in this drag comedy. Girls Will Be Girls casts three male performers in the roles of Evie Harris (Jack Plotnick), a has-been starlet of the ’70s who has since gone to seed in her decaying Hollywood home; her best friend and domestic servant, Coco (Clinton Leupp); and Varla (Jeffrey Roberson), the daughter of a deceased peer/rival of Evie’s who shows up to rent out a room in her home. The tension among the trio of women escalates as Evie prepares for a pull-out-all-the-stops television special commemorating her past career glories, which include sundry disaster movies and TV variety shows. What Evie doesn’t know is that the naïve-seeming Varla has a debt to settle for her deceased mom, and will stop at nothing to seek vengeance. All three lead actors developed their characters in stage shows and cabaret acts; writer/director Richard Day wrote for such television shows as Ellen and The Larry Sanders Show before helming this film, his debut. After its 2003 Sundance premiere, Girls Will Be Girls was acquired by IFC Films for a theatrical release.