In the Shadow of Dracula 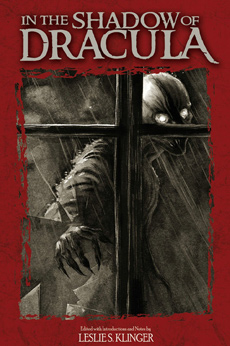 As popular and influential as Bram Stoker’s classic tale of nocturnal menace is, this 1897 novel did not invent vampire fiction, nor was it alone in feeding the Gothic fantasies of the Victorian period. IDW Publishing presents an expertly selected menu of outstanding vampire stories that either informed or benefited from Bram Stoker’s hugely popular creation. These eerie tales of the undead—some 22 in all—form the core canon of classic vampire literature. Chosen and introduced by celebrated literary scholar and author Leslie S. Klinger (The New Annotated Dracula), with illustrations with original illustrations, In the Shadow of Dracula brings to adventuresome readers stories of nocturnal terror that have lived in Stoker’s shadow for too long. Authors include M.R. James, Algernon Blackwood, and Bram Stoker himself. Included are what’s considered the first true vampire story 1819, as well the classic novella Carmilla by Sheridan Le Fanu, the first vampire tale with a lesbian theme, and The Family of the Vourdalak by Aleksei Tolstoy, which gave Boris Karloff one of his greatest roles.