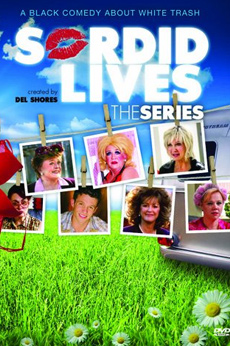 Sordid Lives: The Series (createdby Del Shores) is the story of a small town Texas family presided over by matriarch Peggy Ingram (Rue McClanahan) who takes in the town bar singer Bitsy Mae Harling (Olivia Newton-John) who has just been released from prison.

Latrelle’s son Ty (Jason Dottley) is an actor living in Los Angeles and struggling with several therapists (Margaret Cho, Carson Kressley, Candis Cayne) to come to terms with his homosexuality. Along the way he deals with his first boyfriend (Ted Detwiler), his stalker ex-girlfriend (Sharron Alexis), a vengeful trick (Emerson Collins) and the difficulty of coming out to his straight best friend (Robert Lewis Stephenson) and his family back in Texas.

Sordid Lives is the universally relatable story of a town of family and friends and the trials and tribulations they go through as they learn to see each other for who they are instead of who they wish each other to be.