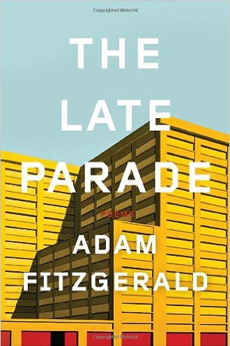 In THE LATE PARADE, Fitzgerald presents 48 poems that “fire dance around meaning itself” (Boston Review), helping to redefine the modernist vision for the twenty-first-century with near-demonic displays of sonorous density and manic verbal fertility. A dazzling debut collection that will be sure to “cause a commotion” (Timothy Donnelly).

“Busy, ornate and elaborate, evasive in their sense, yet charged with emotion, the poems of Fitzgerald’s debut could get quick attention…Partisans—who may compare him to Crane, or even to David Foster Wallace—will accept his invitations.” —Publishers Weekly

“In The Late Parade, Adam Fitzgerald is a master of defeating expectations so as to fulfill them farther along. One has the feeling of climbing higher along a path that is giving way under one’s feet, in pursuit always of ‘a waltz on our breath.’ Yet the rhythmic and consonant commotion of these poems ends in joy. This is a dazzling debut.” —John Ashbery

“Adam Fitzgerald joins an estimable line—a parade?—from Crane to Ashbery to Donnelly. Fitzgerald is truly ‘a noble rider’ of ‘the sound of words,’ to invoke Stevens. We confront here a surging ocean of sound and language, but also a sharp mind, ascetic, even astringent.” —Maureen McLane