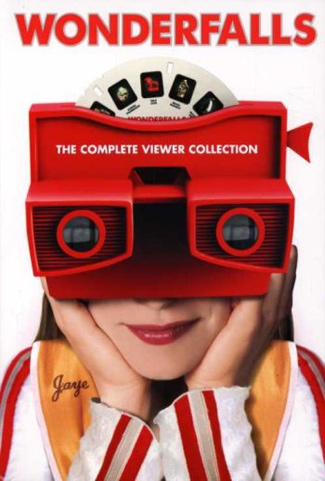 Wonderfalls is probably the most hilarious show you’ve never seen. An hour-long “dramedy” about a young woman who hears the voices of inanimate objects–which instruct her to help out total strangers–the show aired on Fox in early 2004 to critical acclaim and dismal ratings. After airing four times in terrible time slots, the show was quickly canceled, but not before a hue and cry from a small but fervently devoted cadre of fans went up, begging for all 13 episodes to be released on DVD. Thus, the highest-profile DVD release of a canceled show was born, and the nine unaired episodes of Wonderfalls are finally seeing the light of day.

You may be wondering: is it worth it to check out a show that was axed so quickly? The answer is an unqualified yes, as Wonderfalls is quirky without being precious, sardonic without being bitter, and smart without being a show-off about it. Jaye (Caroline Dhavernas) is a graduate of Brown University who’s opted not to put her education to work, and instead lives in a trailer and works at a tourist shop in Niagara Falls, to the consternation of her affluent, successful family. All seems to be going well for this self-proclaimed slacker, until one day a small toy lion speaks to her in enigmatic epigrams, commanding her to help people. Loath to deal in any compassionate way with the rest of humanity, Jaye warily obeys, if only to make the voices stop. Soon, though, she finds herself to be an unwilling humanitarian and accidental hero when more inanimate objects start talking to her, and more people turn out to need her help.

The premise may sound a bit too off-the-beaten-path, but Wonderfalls’ meddling with the ethereal was grounded in a keen awareness of post-college life and the travails befalling young twentysomethings who had no idea where their life was going. And instead of being sanctimonious or inspiring, the show was instead a complex mix of the heartfelt and the angsty, and Dhavernas was one of the most cynically hopeful heroines to grace the small screen. The rest of the cast was also topnotch, including Kate Finneran as Jaye’s high-strung sister, Diana Scarwid as her caustic mother, and Tyron Leitso as bartender Eric, whose tentative romance with Jaye was both affecting and hilarious. Think of Wonderfalls as less of a failure and more of a rare opportunity to see some of the most creative television in recent memory.