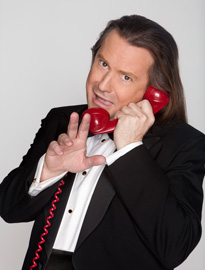 Eric Shaw Quinn wrote what would become his debut novel during his spare time while working as an advertising director and theatre critic. But Say Uncle, a comic and celebratory tale of an eccentric gay man who receives custody of his infant nephew after his sister is killed in a tragic accident, took ten years to find a publisher. The idea of a gay man raising a child was deemed so controversial at the time that one editor went to far as to reject the manuscript with the words, “You and I just march to a different drummer, Mr. Quinn.” Upon its publication, the film rights were snatched up almost immediately, where after some of Hollywood’s brightest stars spent another few years agonizing over whether or not American moviegoers were ready for such a groundbreaking look at love and family. A studio merger prevented the film from getting made. So Eric decided it was time for a pen name. As “Quinn Brockton” he wrote two original novels (Never Tear Us Apart and Always Have, Always Will) based on characters from Showtime’s hit series Queer as Folk. (Who knew Eric was such a Pittsburgh expert!) Soon after he was chosen to write two novels based on the wild life of mega-celebrity, Pamela Anderson. He was hired to just be the “ghost writer” but then Ms. Anderson outed him to the world during an interview with Jay Leno, and the resulting media blitz took Eric around the world, the paparazzi nipping at his heels. It even landed him a spread in the National Enquirer and earned him the dubious title of Amazon’s #1 Chick-Lit Author of 2004. Currently, Eric is putting the finishing touches on Write Murder: A Write Murder Mystery, the debut novel in a mad-cap mystery series inspired by his sojourn in the celebrity spotlight. The Prince’s Psalm, his historical romance inspired by Book of Samuel, will be published in June 2016 by Itineris, a new imprint of Dreamspinner Press. When he’s not busy writing novels, he writes, produces and stars in The Dinner Party Show, a live weekly comedy/variety radio show you may have heard of.