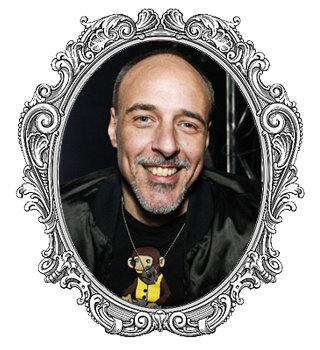 Paul Vitagliano (aka DJ Paul V.) is an institution in the Los Angeles and Silver Lake club scene, and whose eclectic club and radio DJ career has thrived for over 30 years, first in his hometown of Boston and in Los Angeles since 1988.

In January 2011, Paul was inspired to create the “Born This Way Blog” – a photo/essay project for gay adults of all genders to submit their childhood pictures and stories and share their memories of growing up LGBTQ – http://www.BornThisWayBlog.com

Paul’s simple but powerful idea of letting the gay community tell their unique stories touched people everywhere from the US to South America and all over Europe. BornThisWayBlog.com has achieved more than 3.9 million views since its debut and was featured on CNN, Salon, NPR, The Advocate, The Huffington Post, and Sundance Channel.

As co-creator and DJ at the beloved DRAGSTRIP 66 club (which at 20 years is LA’s longest running underground dance event), Paul knows how to expertly work the CD decks with cutting-edge music and beats for alternative and gay/mixed dancefloors. He is also the go-to aficionado for mashups.

You can also hear him spinning tunes for various Goldenvoice concerts around Los Angeles, such as Robyn, OMD, Little Boots, Miike Snow, Jane’s Addiction, Gang Of Four, Gary Numan, Nitzer Ebb, The Gossip and many more.

Paul brought music mashups to the masses on the LA airwaves in 2005 via Indie 103.1 FM with his “Mashup Of The Day” feature, and his electro/indie rock/mashups got heard every Friday afternoon via “The Smash Mix” and every Saturday night with his “Neon Noise” mix show – until they pulled the plug on the radio station entirely in 2009. His “Neon Noise” mix show is now back online on Moheak Radio – Friday & Saturday nights from 10pm-1AM PT – http://www.Moheak.com.

Paul has also been writing music reviews since 1988; he was In Mag LA’s chief music reviewer since 1997, and is now a featured reviewer for Frontiers In LA Magazine.