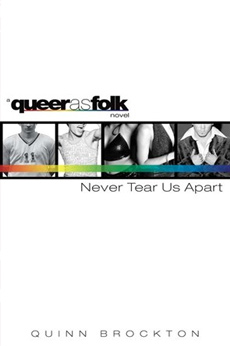 Your favorite Queer as Folk characters take you along on their youthful journey of sexual self-discovery in a new line of books based on the record-breaking Showtime series hailed as “fiercely realistic” by The New York Times. USA Today raves, “There’s never been anything else like it on TV.”

They’ve been to the prom and signed the yearbooks. Now Brian and Michael are apart for the first time since grade school. Brian’s soccer scholarship takes him to Carnegie-Mellon where he finds that he’s a fresh — if not a small — fish in a big new pond. Meanwhile Michael, Deb, and Uncle Vic embark on the annual Novotny family vacation in the Poconos, where Michael makes some “new” friends. When the trip is cut short because Vic doesn’t feel well, Michael learns that his uncle has AIDS and that their family must come together more closely than ever. Soon classes begin for both boys, and new passions and adventures put their friendship to the test. Lindsay, a pretty, talented art major at Carnegie-Mellon, is quickly becoming a fixture in Brian’s life, and Emmett, whom Michael met at Babylon, becomes a good friend outside the club too. As sex becomes more than experimentation for both, Brian and Michael struggle with jealousy, homophobia, the realities of HIV, and finding a place of their own as they find their way back to each other.