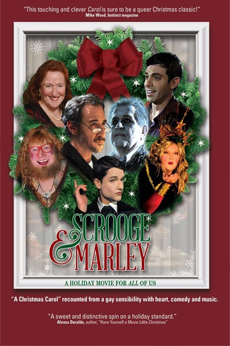 Scrooge & Marley is a modern day variation on Charles Dickens’ classic story of the holidays, “A Christmas Carol.” This is the DVD version of the movie. On Christmas Eve, Ben Scrooge, the man who hates the holidays, is given the chance to begin again when he is visited by three spirits – the Ghosts of Christmas Past, Present and Future. Revisiting the tragic missteps of his life enables Scrooge to rediscover the joy of the holiday season and make a journey back to love. Recounted from a gay sensibility with heart, comedy and music, the magic of Dickens’ timeless tale comes alive from a fresh perspective that will appeal to audiences of all persuasions. Acclaimed out actor David Pevsner portrays Ben Scrooge while former Saturday Night Live star Tim Kazurinsky appears as the Ghost of Jacob Marley. The film also stars Rusty Schwimmer, Bruce Vilanch, Megan Cavanagh, Ronnie Kroell, David Moretti, Richard Ganoung, and JoJo Baby. It is narrated by Tony award-winning actress Judith Light. The stars at the gala opening include Pevsner, Schwimmer, Vilanch, Cavanagh, Kroell, Moretti and Ganoung.